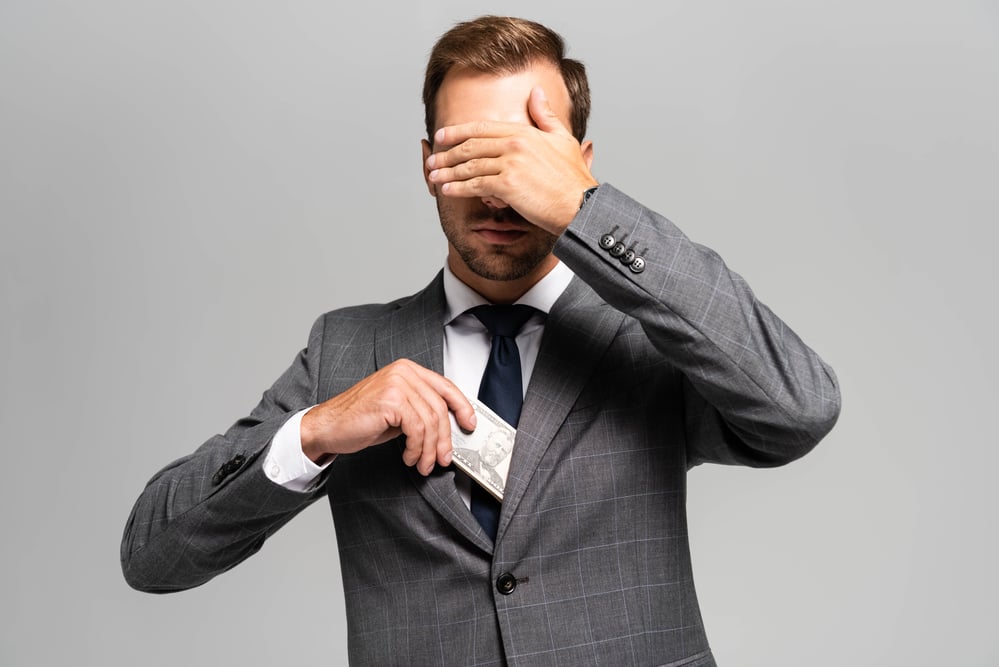 One of the easiest ways to get in trouble with the IRS is by committing tax evasion. Just the words - Tax Evasion - sound like they should be accompanied by those tonal beats from Law and Order.

People who commit tax evasion typically know they are doing it, and that it’s a bad thing. They just hope to not get caught. But tax evasion is a felony with some stiff legal consequences. And it matters.

Tax evasion matters because it reduces the amount of taxes paid and leaves the nation or state short of funding. It’s stealing from the United States. And it can get you into deep, deep trouble with Uncle Sam.

What Is Tax Evasion?

The legal definition of tax evasion is as follows:

“The non-payment of taxes by means of not reporting all taxable income, or by taking unallowed deductions.”

In harsher terms, tax evasion is the criminal act of using illegal means to avoid paying taxes. It is a felony. (See Section 7201 of the Internal Revenue Code.) And it comes with hefty fines ($100.00 to $500,000, plus the cost of prosecution), prison (up to five years), or both. Not to mention a permanent black mark on your personal record.

Convicting someone of tax evasion requires the prosecution to prove that:

In other words, tax evasion is willful. That person did it on purpose.

What if you just made a mistake? The IRS is pretty good at determining the difference between errors and purposeful evasion.

Mistakes include math errors, transposition errors, copying down wrong information, and obvious errors filling out your tax forms. It’s easy to make a mistake considering our complex tax laws, and the IRS understands that.

Don’t mix up evasion with avoidance. Tax avoidance is a legal method of reducing your tax burden by deferring income tax by contributing to an IRA or 401(k), claiming legitimate tax deductions or credits, and deducting valid business expenses.

One way individuals have falsified records is by lying to their CPA. Typically, the CPA sends the client a questionnaire to fill out. It provides the accountant with all the numbers needed for the tax return. The client decides to lie. Maybe an offshore account is denied, or not all accounts are reported. There's no end to it.

Everyone knows tax liability is based on income numbers. So if you fudge the numbers downward - Voila! - lower taxes. It’s tempting, but don’t do it.

Beyond blatantly misrepresenting income, another way of underreporting income is through something called structuring. Structuring is a method of artificially lowering your deposits, withdrawals, and transfers to a point below bank reporting requirements. Since it’s done to avoid detection of your actual income, it is a crime. One that the IRS has pursued relentlessly since the implementation of the Foreign Account Tax Compliance Act (FATCA).

Most people don't bury their money or hide it in a mattress, so the federal government can't find it. However, interest from offshore accounts is a handy dodge for those who feel they shouldn’t have to pay taxes. Interest can add up pretty fast if someone has millions stashed in foreign banks.

Again, the IRS enforces FATCA, which was passed for this very issue.

Maybe you don’t like the number your tax preparer came up with, so you deliberately pay less than your return says you owe. That is easy for the IRS to see. A more mob-like approach is money laundering.

Let's say an overseas vendor owes you money, lots of it. Instead of asking for cash, you tell the vendor to purchase things for you, transfer the goods through a third-party, and call it a gift. There’s no cash income to report because you willfully bypassed the reporting by saying you received a gift. One that just happens to be worth the money the vendor owes you. Sneaky, huh?

Another way of hiding money is by saying the income belongs to someone else - maybe your brother-in-law or some other patsy. If you deliberately assign income that is really yours in an effort to reduce your taxes, that’s tax evasion.

As an example, say you earn lots of money. Furthermore, the source of your income is split between five vendors. Instead of saying the income came to you, you pick out five other people (like that brother-in-law or a stranger off the streets) and assign the income from one vendor to each.

Each of those people gets some of the money and gift the rest back to you. While it’s OK to give monetary gifts and it’s OK to reassign income, doing both together for the purpose of reducing your tax rate, turns it into felony tax evasion.

If the IRS comes calling and says you evaded taxes, and the money was from legal sources, you can do one of two things.

The IRS is giving you one more chance to come clean.

If you don’t take the chance given and try to continue acting innocent, you throw yourself on the mercy of the IRS in Tax Court. And the feds aren’t known for being merciful.

By proving that (a) a tax liability exists, (b) you took specific actions to evade (or attempt to evade) paying your taxes, and (c) you did it on purpose to keep from performing your legal duty to pay taxes, the IRS prosecutors can convict you of tax evasion, ask you to pay upwards of $100,000, and maybe even put you in prison for five years. If a corporation is found guilty of tax evasion, the fine can go up to $500,000.

To add insult to injury, you have to pay for court costs, too.

Tax evasion shouldn’t sound like such a good idea by now. Nothing says people with certain incomes won’t be prosecuted. Anyone can be charged with tax evasion if they try to falsely minimize any kind of income by lying about it, hiding it, or disguising it.

Simple mistakes and legitimate tax avoidance strategies are fine. Just don’t lie to the IRS. It won’t end well. However if you find yourself facing tax evasion charges, the experts at Top Tax Defenders can help.