Are you fed up with the amount of money the IRS takes every year? Fine, but that doesn’t mean you can stop paying them. Intentionally refusing to pay is tax evasion, and it’s not a solution to the problem.

What is Tax Evasion?

Tax evasion is deliberate underpayment or non-payment of taxes. Any person, corporation or organization who evades paying taxes is engaging in illegal action. This is a federal offense under the Internal Revenue Service (IRS) tax code and punishable by law. Tax evasion can apply to all types of taxes, including income tax, sales tax, employment tax, and other federal, state and local taxes. Don’t be fooled into thinking you’ll get away with non-payment by failing to submit your tax forms, because if it can be proved you did it intentionally you will be on the hook.

Tax evasion and tax fraud are two sides of the same coin. Tax evasion is a type of tax fraud, and it is usually easier to prove a taxpayer willfully avoided making tax returns than they planned to criminally defraud government. As a result, it carries lower penalties and has slightly more wiggle room (a.k.a. benefit of the doubt), but the margin is small.

If tax evasion is deliberately avoiding paying Uncle Sam what’s legally due, then what exactly is tax avoidance? These sound similar and they are, except tax avoidance is a legal action. It refers to lawful reduction of the amount of taxes paid using IRS-approved criteria. Some ways of doing this include:

Avoiding unnecessary taxes is legal, and your accountant or tax consultant will help you find ways to reduce your tax bill.

The Consequences of Tax Evasion

Breaking the law has consequences, whether intentional or not. Tax evasion cases are typically prosecuted by federal or state agencies, depending on the law that has been violated. An individual convicted of felony tax evasion could be fined up to $250,000, or receive a prison sentence of up to 5 years. For a corporation, the fine could be up to $500,000.

The punishment depends on the value of the tax evasion, as well as issues such as whether you carried out multiple counts of evasion, received income from criminal sources, or used sophisticated techniques to commit the felony. Some offenders receive probation sentences lasting between 1 and 3 years, which can be extended if they violate the terms and conditions of the sentence. In other words, it’s not a walk in the park!

Defending yourself against tax evasion charges can take most of the same formats used in criminal defenses:

Don’t wait until you can’t see the light at the end of the tunnel. If you think you might be facing tax evasion charges, the sooner you contact Top Tax Defenders, the better you’ll sleep at night.

Received an IRS Audit? Learn everything you need to know about facing the IRS and winning. 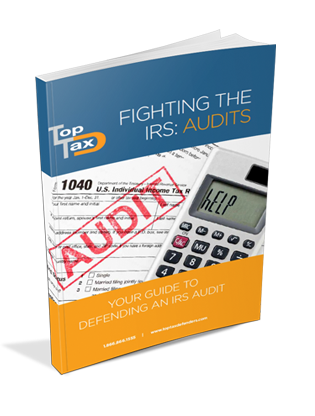 "Top Tax Defenders went above and beyond for me. They maintained a level of professionalism while being very friendly. They addressed all of my questions and concerns and were extremely knowledgeable about all areas of tax preparation. I look forward to working with them again in the future."

RESOURCES TO CHECK OUT

READY TO GET STARTED?